The castle was originally founded many centuries ago by the chief of the Anglo Saxon Bulmer family whose last male heir, Bertram Bulmer had a daughter called Emma who married Gilbert De Neuville, a Norman baron who had come to England with William the Conqueror. De Neuville's descendants were called the Nevilles and were the owners of Brancepeth Castle until the sixteenth century.

In 1569 Brancepeth was confiscated from the Nevilles by the crown following their involvement in a plot to overthrow Queen Elizabeth I called the Rising of the North. The Nevilles had been the chief instigators of this rising which had been plotted at Brancepeth and Raby Castle with the assistance of the Percys who were the most powerful family in Northumberland. 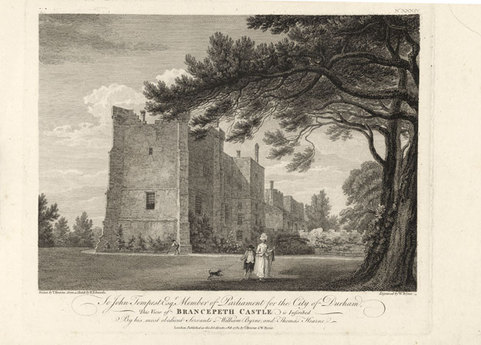 Brancepeth Castle remained in the hands of the crown for a number of years until King James I gave it to Robert Carr, Earl Of Somerset. Later the castle was taken from Carr when he was found guilty of the murder of Sir Thomas Ovebury. From Carr it passed to the wealthy son of a Gateshead blacksmith called Ralph Cole who also bought Kepier Hospital.

The next owner was Sir Henry Bellaysyse, whose daughter Mary fell in love with Bobby Shafto who lived at Whitworth Hall near Spennymoor just across the River Wear from Brancepeth. Miss Bellaysyse's love for Bobby became the subject of a very famous north country song but alas Mr Shafto had eyes for someone else and Mary is said to have died of a broken heart.

In 1796 Brancepeth was bought by William Russell a Sunderland banker. The Russells of Brancepeth became one of four great coal owning families in the north called the 'Grand Allies' and William's son Matthew became the richest commoner in England. Later by marriage Brancepeth became the property of Lord Boyne who is commemorated in the name of a public house a little further to the north at Langley Moor. There have been a number of other owners since that time.